Shining the Lights of Generosity 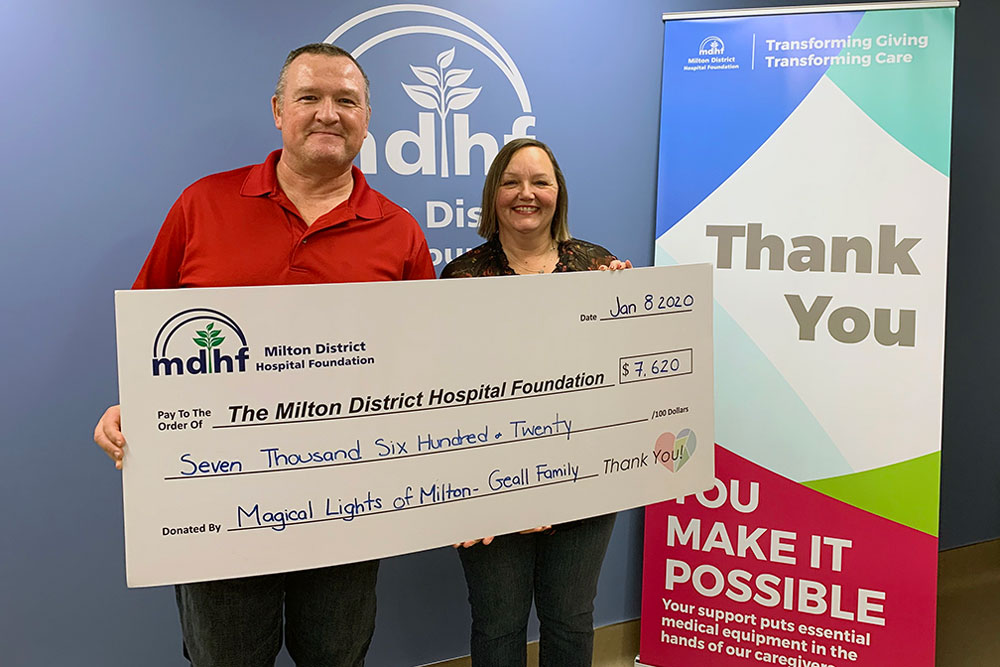 When the button was pushed to start the Magical Lights of Milton show for 2019, all you could hear was someone quietly whisper, “It’s so beautiful.”  David and Donna Geall have been running the annual light show for the last ten years, donating the proceeds to Milton District Hospital Foundation.  David explains that, “We wanted to keep it local so that people would be able to see the impact of their donation when they visit Milton District Hospital.  This year, the Gealls are being recognized for their contribution with the Brian Brady Award, which is presented annually to the longest standing community partner of Milton District Hospital Foundation.

Since the Geall’s have been running their light display, many people in Milton have integrated it into their holiday tradition.  The show includes 9,600 LED lights and over 23,000 individually programmed pixels, which are synchronized to both Christmas and popular music on 99.7 FM.  However, words cannot describe the feeling of sitting in your warm car and watching your favourite holiday music come to life in a beautifully festive display.  Donna says, “it always brings me joy to see the children’s faces light up when they see the show.”

Over the last ten years, the Magical Lights show has raised $60,420 to fund the purchase of equipment for Milton District Hospital.  As a paramedic serving the community of Milton, David is well aware of the importance of ensuring that our hospital is well equipped.  He says that he’s “very proud of our expanded Emergency Department.  It’s so much better now.”  However as Donna points out, “The way that Milton Is growing, it won’t be long until our hospital seems small again.”

Helen Vatistas, the Executive Director of Milton District Hospital Foundation is always encouraged by the support of our community partners.  She says “the contribution the Geall’s have made has an incredible impact on the patients at Milton District Hospital.  Since government funding does not cover the purchase of new or replacement equipment or technology, we depend on the support of our community.  The Gealls have found a way to give to our hospital while also adding to the magic of the season. “

If you are interested in hosting an event to support the Milton District Hospital Foundation, please contact Vanessa Briguglio at 905-878-2383 x 7173 or by email at vbriguglio@haltonhealthcare.com 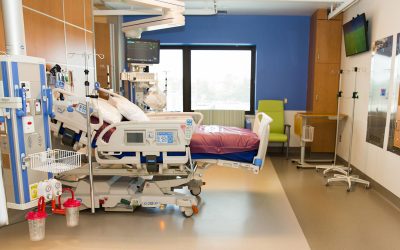 “This Will Survive Me After I Am Gone.”

Nigel Punton is grateful for the care that his sister received at Milton District Hospital.  “The willingness of the doctors to explain everything to us was impressive.  Also, the nurses in intensive care were compassionate and competent.”  Partly because of this... 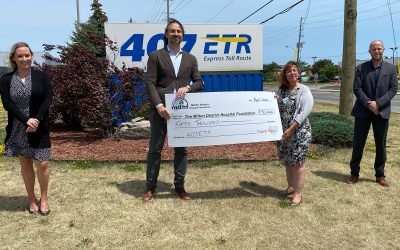 “We Decided to Do More.”

Milton District Hospital Foundation was delighted to receive a $50,000 donation from 407 ETR last year.  At the beginning of the pandemic, the company generously donated gift cards for free 407 ETR travel for hospital staff who continued to commute to work. ... 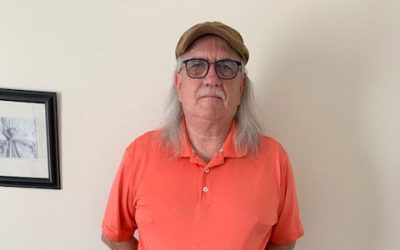 Steve White, an employee of Karmax for the past 12 years, is not a person who enjoys going to the doctor.  However, recently when he was experiencing severe pain in his abdomen, he made the decision to come to the Emergency Department at Milton District Hospital. ...